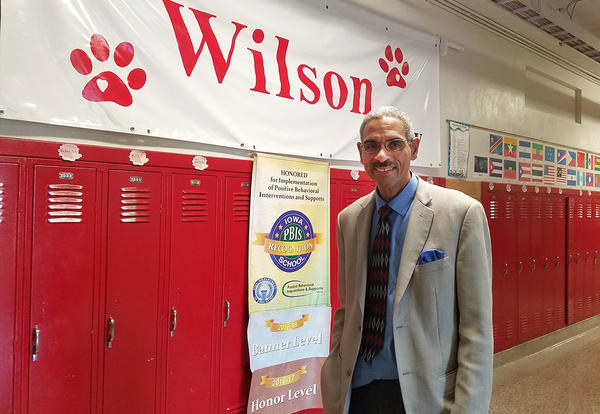 OTTUMWA: The nominations for this year's Gene Schultz Community Service Award recipient can be summed up in two words: passion and spirit.

Despite not hosting its annual banquet this year due to COVID-19, Greater Ottumwa Partners in Progress still managed to surprise recipient Jeff Hendred prior to the start of the school day at Wilson Elementary Thursday with the award.

"The committee, it was an astounding yes for Jeff," said Shea Greiner, vice president of engagement and organizational advancement at GOPIP. "There are so many things he has done for this community."

Nominations for Hendred were five pages long, Greiner said, and summarized in an announcement from GOPIP.

"In everything he has done or does now in our community, Jeff gives his best and is a face of positive encouragement and hope for the future," said Himar Hernandez.

Blaire Siems said, "He's a pastor, a fundraiser, a small-business owner and serves on countless boards and committees. His smile lights up every room he enters, and he never shies away from the challenges in our community."

"I'm humbled, very humbled, because I think there are a lot of people that do a lot of things for our community that would be better recognized than me," Hendred said. "I'm very humbled to be recognized by what Gene Schultz did and what he stands for."

"It was so hard keeping it a secret because there were so many moving parts," said Greiner, including inviting his kids to Thursday's ceremony and setting up a small reception for staff in his office.

"They were looking for a way to honor Jeff where maybe there would be some [celebration]," said Kim Hellige, director of community programs for Ottumwa Schools. "He does a circle time with the students before school, like a lot of the schools do. We just made plans to do it then. It worked out really well. I told Jeff that Wilson was receiving an award, so he had no idea."

Greiner said Hendred was told that Wilson Elementary was receiving an award from GOPIP, not just the principal. "As I started speaking, he realized very quickly he was receiving the award, and he was very humbled. He was speechless. That doesn't happen to Jeff very often. It was great."

Hendred said the surprise ceremony Thursday morning was good timing, with it coming in the morning as the building gathers prior to the school day. The children were very excited for him. "They didn't knowwhat was happening," he said. "The relationship we have, I love them and they love me. They were very excited."

Even several hours later, he said, the students continued to congratulate him in the hallways.

The students weren't the only ones there to celebrate with him. His son and daughter also attended the ceremony. "To see them standing beside me, it was a shock. It still brings tears to my eyes."

Hendred has worked in the Ottumwa Community School District since 1988 and is currently principal at Wilson. He has also served at Douma and Horace Mann, starting as a classroom teacher. He and his wife Sandra own and operate Polar Xpress frozen yogurt shop in downtown Ottumwa. He has also been involved in the restoration of the former Capitol and Capri theaters (now called Studio 229), and serves as a key organizer of local Black History Month, Hispanic Month, Marshallese and Dr. Martin Luther King Jr. celebrations. Hendred has also served as an associate pastor ofHickory Grove Church for the past 20 years.

"I can't think of anyone more deserving of this award," said Superintendent Mike McGrory. "I've known Jeff for more than 20 years. Throughout his career, he has had a huge impact on our schools and the community. This honor is well deserved."

"He gives back in so many ways, through the district of course, but in the community as well," Hellige said. "He's just a positive influence on so many people and he's touched so many lives. We were excited to be a part of honoring Jeff."

Hendred said his focus will continue to be on Ottumwa and his family as he takes in winning the award. He plans to share the video with his wife, who is currently in the hospital, "so we can celebrate the great things God is doing in our community."

It's not about bringing the spotlight to himself, he said, but using it to help inspire his children, nieces, nephews and in-laws to do everything they can for the community. "That's how I plan to celebrate, to be an inspiration to them."

Greiner said surprising nominees with the Gene Schultz Award every year is her favorite part of the job. "Surprising somebody so caring and giving, it's one of my favorite things to do. It's probably one of the best things I get to do.

"I love Ottumwa. I'm living the dream and doing everything I want to do and giving it God. It's just my opportunity to give everything back he's given to me," Hendred said, adding that he plans to die here giving all he can give. "I want to make Ottumwa a place people want to come to. That's my mission. I've always said I can never do enough for Ottumwa."

Oct 30 2020
TRACY GOLDIZEN • COURIER FEATURES EDITOR OTTUMWA: Celebration was in the air of downtown Ottumwa Thursday evening. Not only were people out to celebrate the streetscape project's completion with a ribbon cutting, but the community was also being recognized with the Small Business Association Iowa Small Business Community of the Year Award. "I'...Continue Reading